From Corn to Cordite.

The Style of the Book: 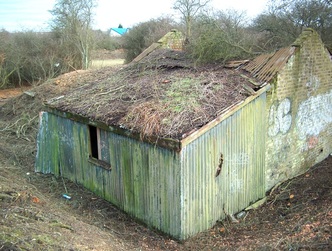 Explosives magazine B.E.S 2009.
The Style of the book.
When the content of the book is considered it would be easy on one hand to write a detailed technical treatise on the chemistry of explosives and on the other a history of the financial details and the chronological order in which the buildings were built. The style that has been adopted is to have short accounts of various facets of the history and to bring them together so as to allow dipping into the book and reading a page or two and then to find the particular detail being interesting of itself.
The Contents of the Book:
We will consider incidents in Russia, Sweden, Scotland, Italy, France, America, Holland and Australia.  The author will discuss the Corn Laws, Enclosure Acts, the Petroleum Act, The Gunpowder  Act and The Explosives Acts, etc.
Before the reader jumps to the conclusion that these things are boring please be patient, The above mentioned Acts of Parliament were the result of some very interesting  social and personal incidents.
We will meet some fascinating characters including  Alfred  Nobel,  arguably the greatest  industrialist that the world has ever seen. We will follow his life and see the tragedy and incidents that eventually led him to come to Britain to establish a non-governmental explosives industry.
For the more serious student of Local and Social History the background history has been included giving a rounded perspective of the factors which shaped this corner of Essex. The author believes that local history should be viewed from a larger viewpoint that includes both national and world legislation. An incident at a remote location can sometimes profoundly affect the development of events in a local situation.
The reader will find a comprehensive history of the explosives industry and the events that shaped its growth and development, with thumbnail descriptions of the men who were instrumental in its rise to importance.
Also included for reference are descriptions of the different types of explosives and their specific uses and properties.
There is a fashionable belief that explosives are only a harbinger of death and destruction, this of course can be true. It is important to put this statement into context. We must not ignore the use of explosives in mining, tunnelling, civil engineering, quarrying, railway construction, demolition and many more applications.
We read about George McRoberts who was a man, not unlike Nobel, who designed and conceived the British Explosives Syndicate at Pitsea Hall Island in Essex.
History is created by all; great and small, the reason why some of us are remembered is that the spotlight of history will sometimes shine upon us. One of the purposes of this book is to shine the spotlight on a particular individual namely Mr George McRoberts of Falkirk in Scotland who was in the right place at the right time. The story will unfold to show that without him the area in Pitsea would probably be very different today.
For the benefit of students who may wish to follow up any of the leads quoted in this book the author has included all the references to the papers and books that were consulted, and a further reading list is included.
The book is fully indexed to ease the search for specific topics. Also included is an index of names of local people who have been mentioned in the book.
If you think that this book will help you to make explosives, think again, it will not, chemistry is one thing but speaking as a chemist and an expert in explosives, it took years for people to make explosives relatively safe at the cost of hundreds of lives. Skill and practical expertise is needed to manufacture explosives. Please Dear Reader do not think that it is a simple matter make explosives it is not! There have been more than a few people that have arrived at the Pearly Gates with a look of surprise on their faces.