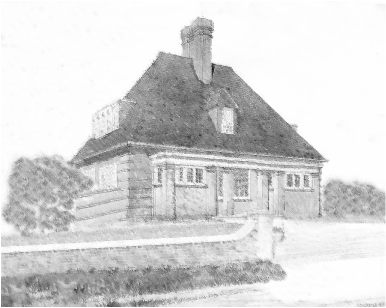 Drawing B.E.S Office in 1928.
The many social reasons for the establishment of the British Explosives Syndicate in Pitsea is given in detail.  In particular a discussion repeal of the Corn Laws and the Enclosure Act that altered forever the nature of farm ownership and the price of land. This fall in land prices  brought the British Explosives Syndicate and Plotlands to Pitsea. The equipment, methods and chemical processes that are part of the explosives industry are described together with detailed description and photographs of the manufacture of Nitroglycerine, Dynamite and Cordite including production of mixed acid and acetone recovery. The rise and fall in prosperity of the factory at Pitsea near Canvey Island in Essex is described and gives a national picture of the industry in general up to and  from WW1 and to the 1920’s. The book is the history of a small company in a backwater that became Wat Tyler Park in Essex, but can be used an exemplar of most high explosives factories and munitions plants, like the British Dynamite Company Ltd.  Trades Unions and wages and wage claims are discussed. There are many references to the Local history of Pitsea, Vange and Essex. The influence of the First World War on the munitions industry is described with many details of the vital part played by the employees, both male and female, that altered industrial relations for all. The Ministry of Munitions and munitions service badges are examined. An account of the detonations and explosions that occurred in the early years of the Pitsea factory are graphically described with a new explanation for one of the explosions. It also describes the explosion at Cwm y Glo in North Wales which was to effect changes in the explosives industry. The subsequent use of the site by Sea Transport and its use as an Ack Ack site is recorded. A chapter on the effect on local trades  and the changes in sea level are discussed. The book is copiously referenced  to enable further academic research. Please see 'Download Pages'  where the index and contents list will be found.       The author has endeavoured to write the book in a readable way and has avoided the tendency to make the technical and historical aspects heavy reading. The book and references will be useful to students of industrial and social history and should serve the local history reader in Essex.

Safety Notice: This book is in no way intended to be a cookbook for the manufacture of explosives,

﻿﻿“Life is pleasant. Death is peaceful. It's the transition that's troublesome﻿﻿."